The Zorya Guitar Duo was founded in 2014 by Antonio Peršak and Borna Kuća when studying in Croatia. They studied at the prestigious Varazdin School of Music under the tutelage of classical guitarists Moreno Vinceković and Ninoslav Plantak and through playing together, Antonio and Borna quickly cultivated a musical chemistry that has resulted in a dynamic and exciting performance style. After winning first prize at several national and international chamber music competitions, they continued their classical guitar studies with the internationally renowned guitarist Craig Ogden at The Royal Northern College of Music in Manchester. 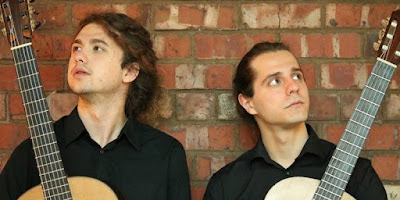 The Zorya Guitar Duo perform a wide range of repertoire from early Renaissance to Contemporary music. However, much of the duo's energy has been directed towards performing Baroque and Balkan music, a style of music that is traditional to their country. Their love and appretiation for Balkan traditional music has taken them on numerous adventures and it has given them the opportunity to shape and develop their style as a guitar duo. While continuing to perform classical works by composers such as Bach, Scarlatti, Rodrigo, and Ravel, the Duo's aim is to promote Balkan music which in itself gives the audience a colourful diversty of musical styles and cultures.
Programme:
A. Marcello/J.S.Bach – Concerto for Oboe and Strings in D minor, arr. for guitar duo
1. Andante e spiccato
2. Adagio
3. Presto
V. Ivanovic – Levantine Journey
Djurda´s Round Dance
M. Ravel – Le Tombeau de Couperin
5. Menuet
V. Ivanović – Balkan Express
M. Tadić – 4 Macedonian pieces
1. Zajdi, Zajdi
2. Pajdushka
3. Jovka Kumanovka
4. Gajdarsko
Suggested donation: £5
The church is open from 5pm, start of the concert is 5.30pm. Before the concert there will be a church service (in German) at 4pm. Everybody welcome.
Please register via Eventbrite https://www.eventbrite.co.uk/e/zorya-guitar-duo-from-bach-to-balkan-tickets-54433767865.